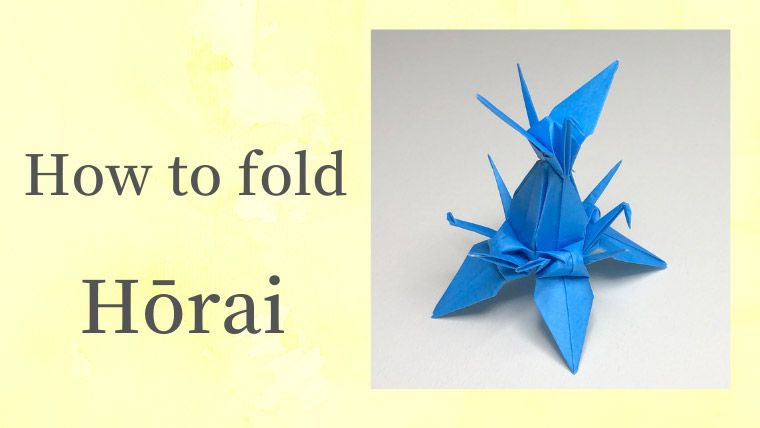 (２２)
Move the paper in the direction of the arrow to make a valley-fold on the top part which a mountain-fold is on.

(２３)
If you push the flap with making creases like this picture, it will get easier to make a valley-fold.

(２４)
This picture is halfway through.

Then turn the paper over.

(２６)
Make the bottom four cranes while folding four flaps in the direction of the arrows.
(in a clockwise direction)

However, if you make one crane while folding one flap, other flaps will be unfolded.
Therefore, fold one flap when making one crane.

Make a crane and then revert it back to a square

In this model, the more you complete cranes, the smaller it get space to make a crane.
Also, it get easier to put pressure on connecting parts.

Therefore, repeat steps which you make a crane and then revert it back to a square.
After making the 4th bottom crane, complete each crane again.

In order to get easier to fold a crane, make a mountain-fold on the dotted line.

(２９)
Then make a star-shape while referencing the next step.

(３０)
If you make creases of a star-shape near the top crane neatly, connecting parts will be put pressure.

(３１)
After making a star-shape, move the left and right to the center in order to get easier to make a bird-base.

(３２)
Move the left and right like this picture.

(３４)
This picture is halfway through.

(３６)
This picture is taken from the back side.

Make a bird-base while folding the flap in a clockwise direction like this picture.

(３７)
In order to get easier to fold a head/tail, lean the bird-base to the right.

Move it carefully so that connecting parts don’t get pressure.

On this site, I've considered and posted how to fold Renzuru.

Renzuru means connected-cranes which are made of only one paper without glue and tape.